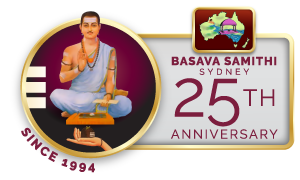 Basava Samithi Of AustralAsia (BSOAA) Sydney chapter is a non-profit organisation established in 1994.

The purpose of the organization is mainly to propagate the principles of Basaveshwara and other Sharanas, which aim at bringing an egalitarian society, based on spirituality without discriminating religion, caste and creed.

Basavanna was a philosopher and social reformer, who lived in Karnataka, India in 12th century. His teachings, philosophy and concepts transcend all boundaries and address the universal and eternal. He said to have been a mystic by temperament, an idealist by choice, a statesperson by profession, a man of letters by taste, a humanist by sympathy, and a social reformer by conviction. Thousands of Sharanas from different parts of the world joined his movement, enriching it and the Kannada literature with the essence of divine experience in the form of Vachanas that define a new way of looking at God and life.

Anubhava Mantapa, the religious parliament, established by sharanas laid down the foundation of social democracy. They believed that man becomes great not by his birth, but by his worth to the society. Basava philosophy guarantees women an equal status with men. Social equality and universal brotherhood were the basic principles. The concepts of Dasoha and Kayaka were introduced by sharanas.